Additional Coast Guard members, known as ‘Coasties’, were stationed on Monhegan to patrol the shoreline looking for enemy vessels. The men lived with the Lighthouse Keeper’s family, ate in a room on the main floor in the Keeper’s house, and shared a room upstairs for sleeping. Albert Chamberlain was stationed on Monhegan between 1941-1942. He remembered walking patrols between Black Head and Whitehead, punching a clock in a shed at Whitehead to prove he had walked the patrol. They would carry kerosene lanterns and look for German vessels. The lanterns had to be carried in the front of the person to prevent the wind from blowing them out, however, the ring of light created by the lantern would blind the walker to anything outside it’s scope. 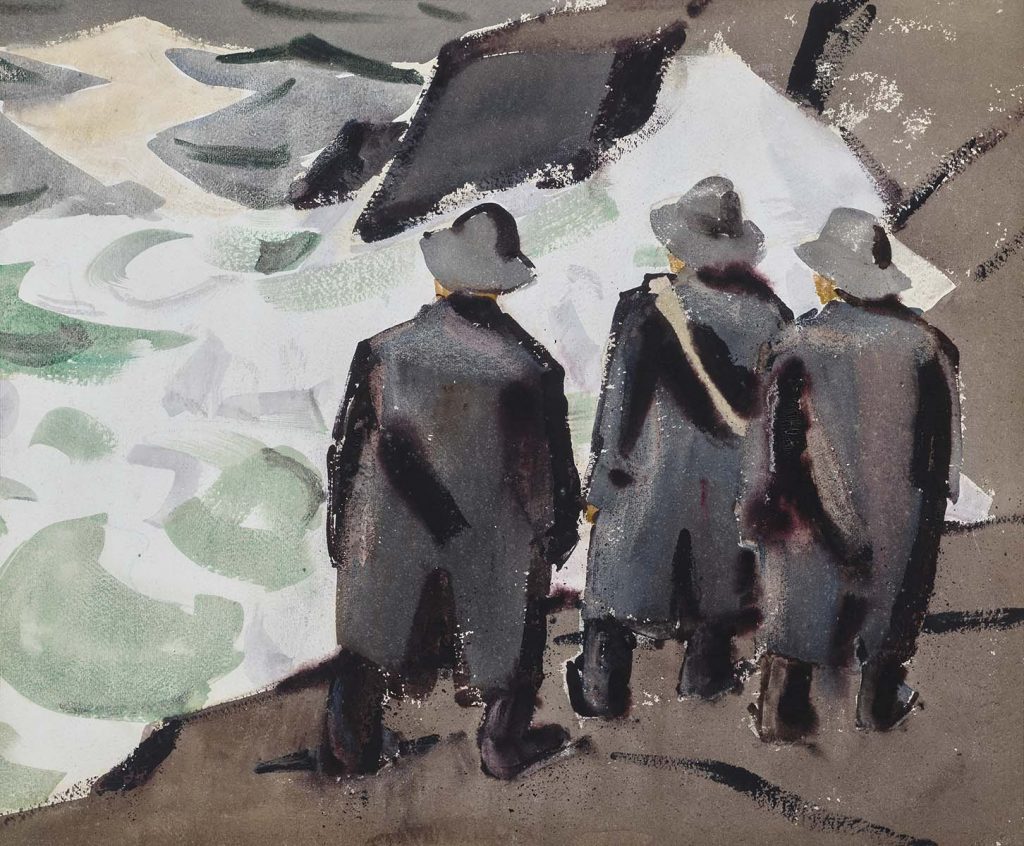 Vinal Foss, had served as a civilian Assistant Fog Keeper (1929-1934) and Fog Keeper (1934-1937) on Manana before he became Lighthouse Keeper on Monhegan in 1937. Foss continued at Light Keeper until 1945. The last three years of his service, Foss was a member of the Coast Guard, under the supervision of the Navy. In November, 1942, he enlisted in the Navy as a Boatswain’s Mate First Class at Rockland, Maine. Foss was honorably discharged from the Coast Guard Reserve in November, 1945. Foss and his family moved to Searsport, Maine in 1947.

Everett Quinn became Keeper at Manana Fog Signal Station in April, 1941 and stayed until March, 1942. Although technically not in the service during his time on Manana, Quinn was a member of the Coast Guard during WWII from October 1942-May, 1946.

“The fog signal station is operated by Everett Quinn with Henley Day as assistant keeper. Two houses for keepers and their families at the fog signal, high up on a bluff overlooks the sea on all sides-furnish a unique living. ‘It’s a job, and the pay is regular’ Mrs. Quinn stated as she showed her cozy home. The Quinns were at Mount Desert Light 12 years previous to coming to Manana.”  Portland Sunday Telegram and Sunday Press Herald September 6 1942 “Monhegan Donates WWI Shells for Salvage”

Henley Day was Fogkeeper from 1942-1954. After twelve years at the Fog Station, Day moved across the harbor and became the last civilian Lightkeeper on Monhegan from 1954-1956.

Kenneth Pinkham was Coast Guard personnel, seaman first class, stationed on Monhegan. He was a merchant marine and enlisted in the Coast Guard in 1942 and served “a continuous period of three years’ active service on 15 September, 1945 with no mark in conduct of less than 4.0.” Pinkham was third assistant keeper at Manana Island Fog and Signal Station.

Pinkham and his family owned a house near the library and continued to live on Monhegan after he got out of the service. Doug Odom encouraged Kenneth to stay and go lobstering. In 1950, Kenneth, Grace and their two children, Duane and Dennis, moved to the mainland.

“The first change in routine since the Coast Guard took over supervision of the fog horn and light stations was affected this week when a mechanic was added to the staff at Manana. He is Joseph Orr of Portland.” Monhegan Press May 5 1940 “Coast Guard Mechanic Added to Manana Crew” 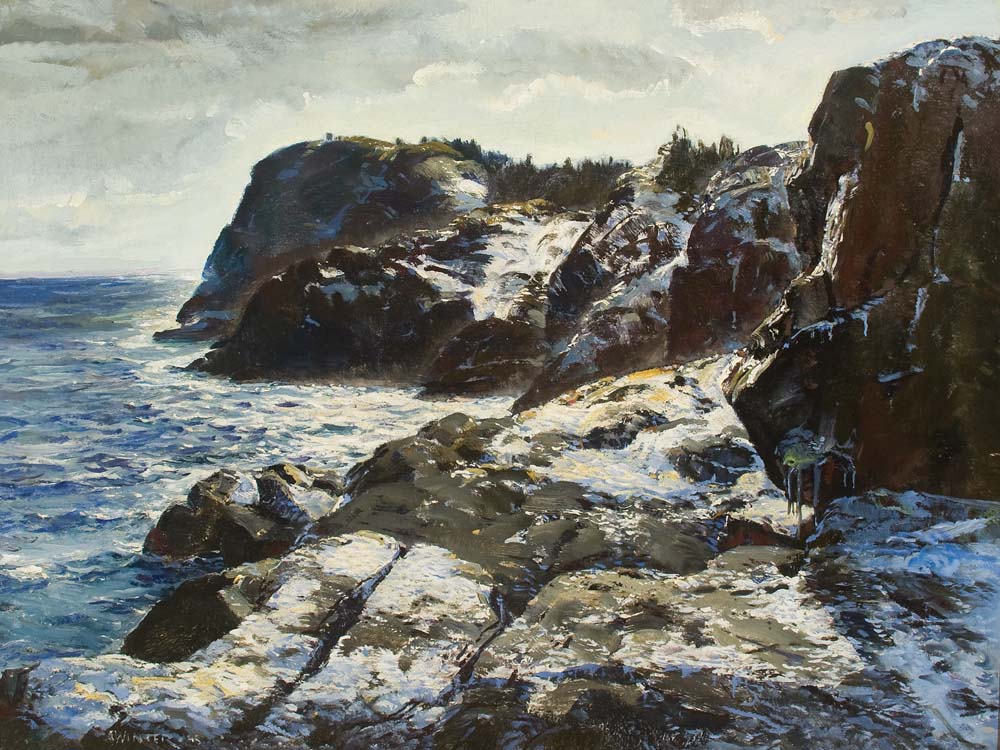 Winter, Andrew George. Seaward Cliff. 1945. If you look very closely you can see the Coast Guard check point on top of Whitehead.  This is the only known image of that structure as photography was prohibited along the coast during WWII. 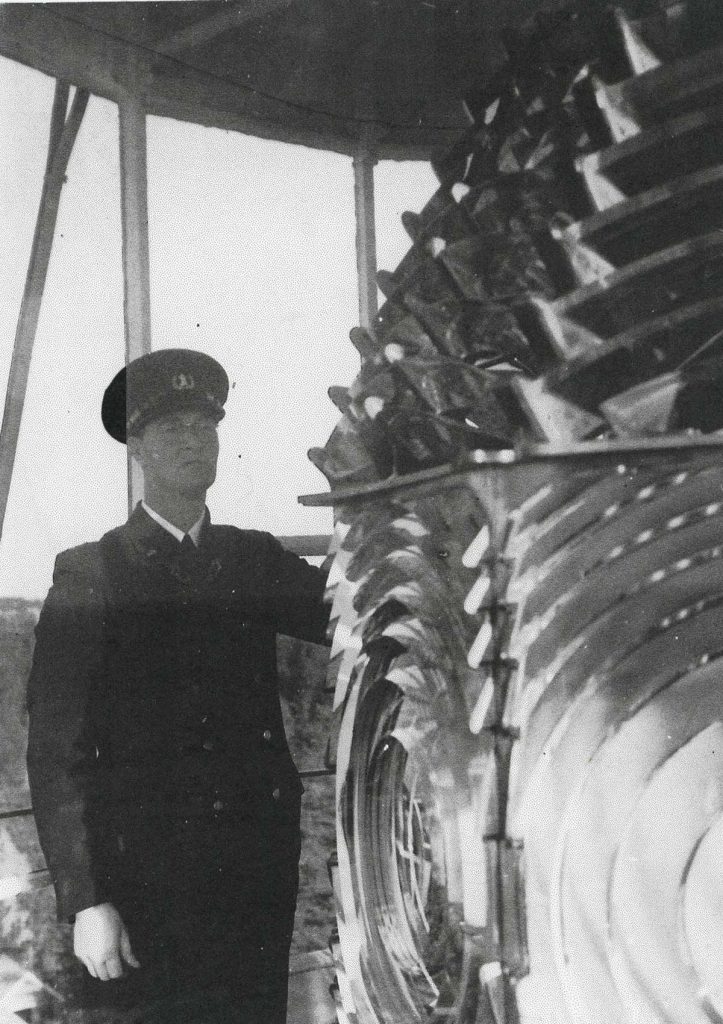 Vinal Foss, Lightkeeper next to the Fresnel lens
on Monhegan. 8 Feb. 1940 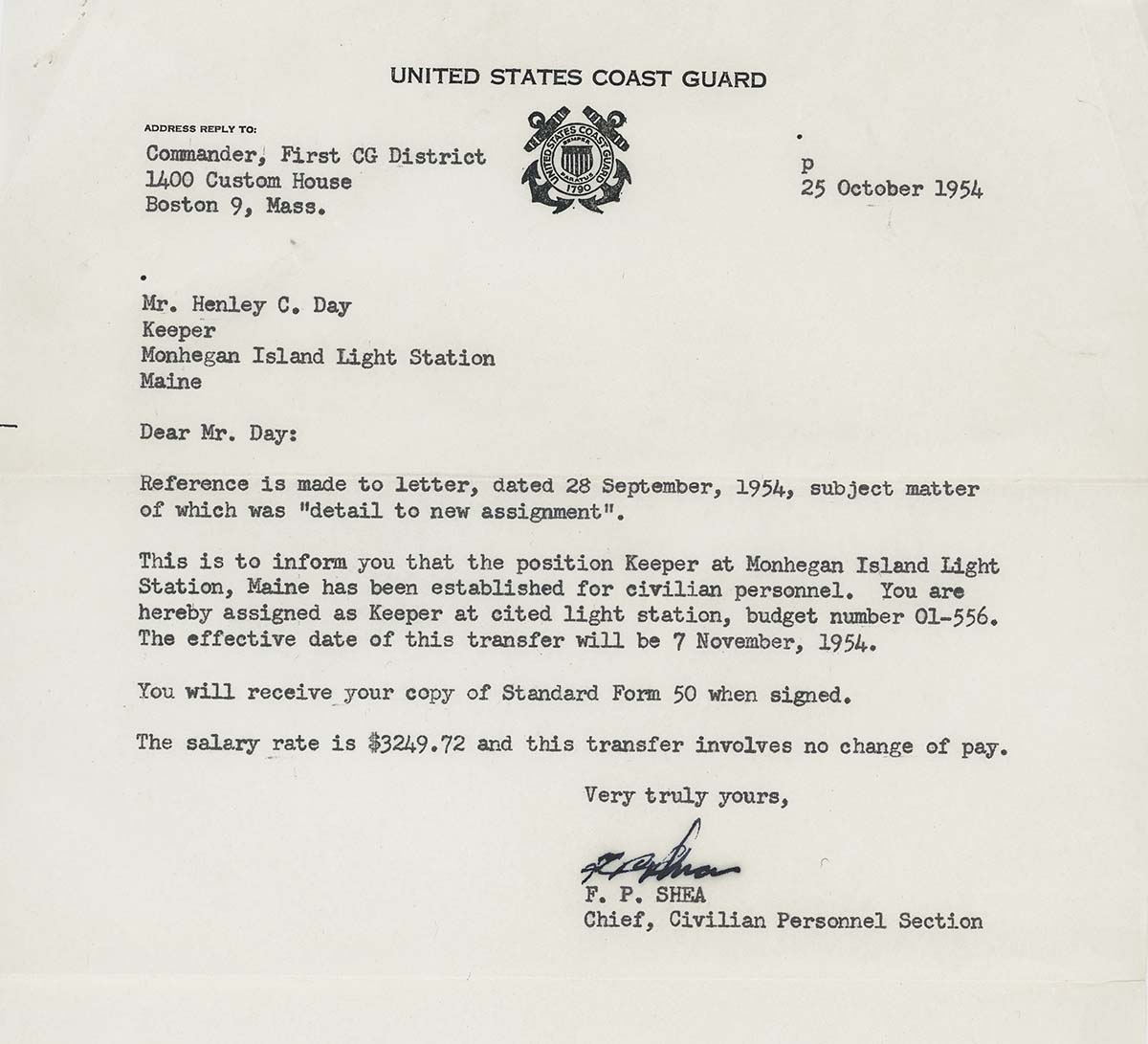 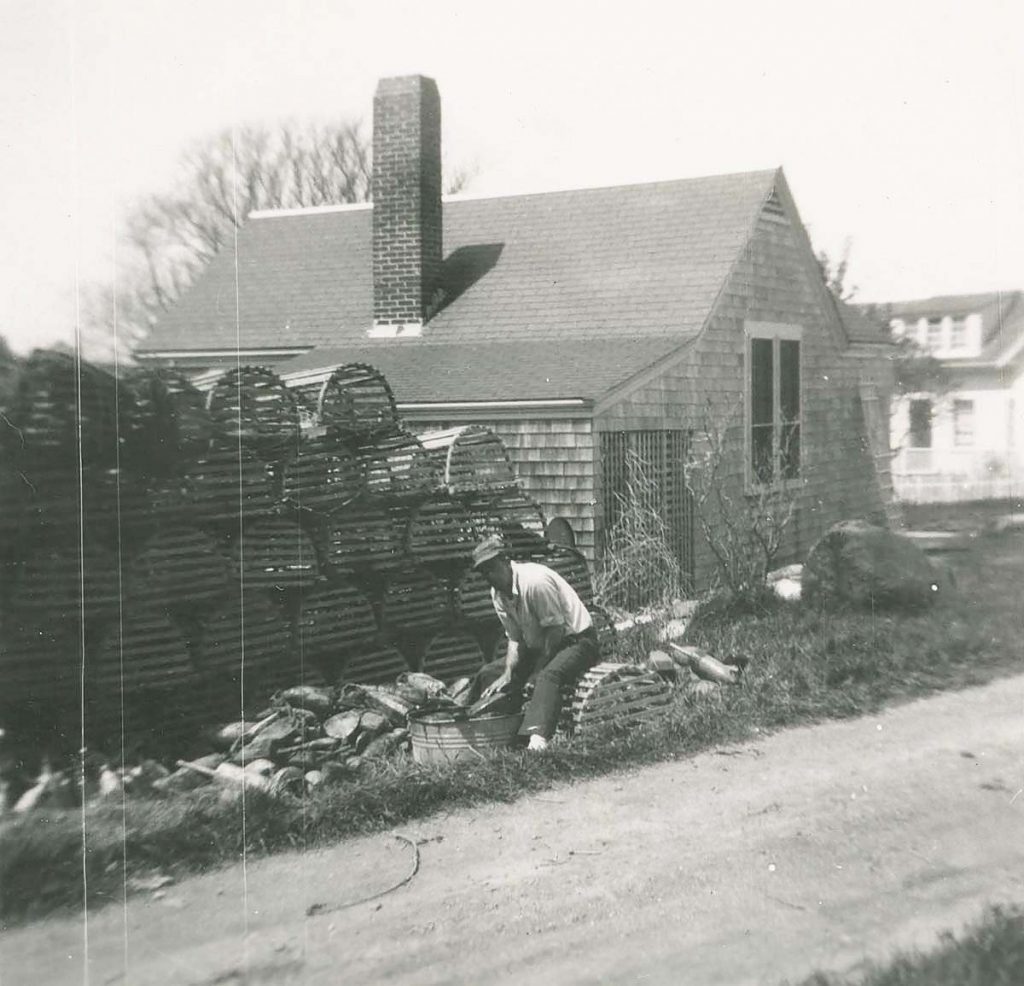 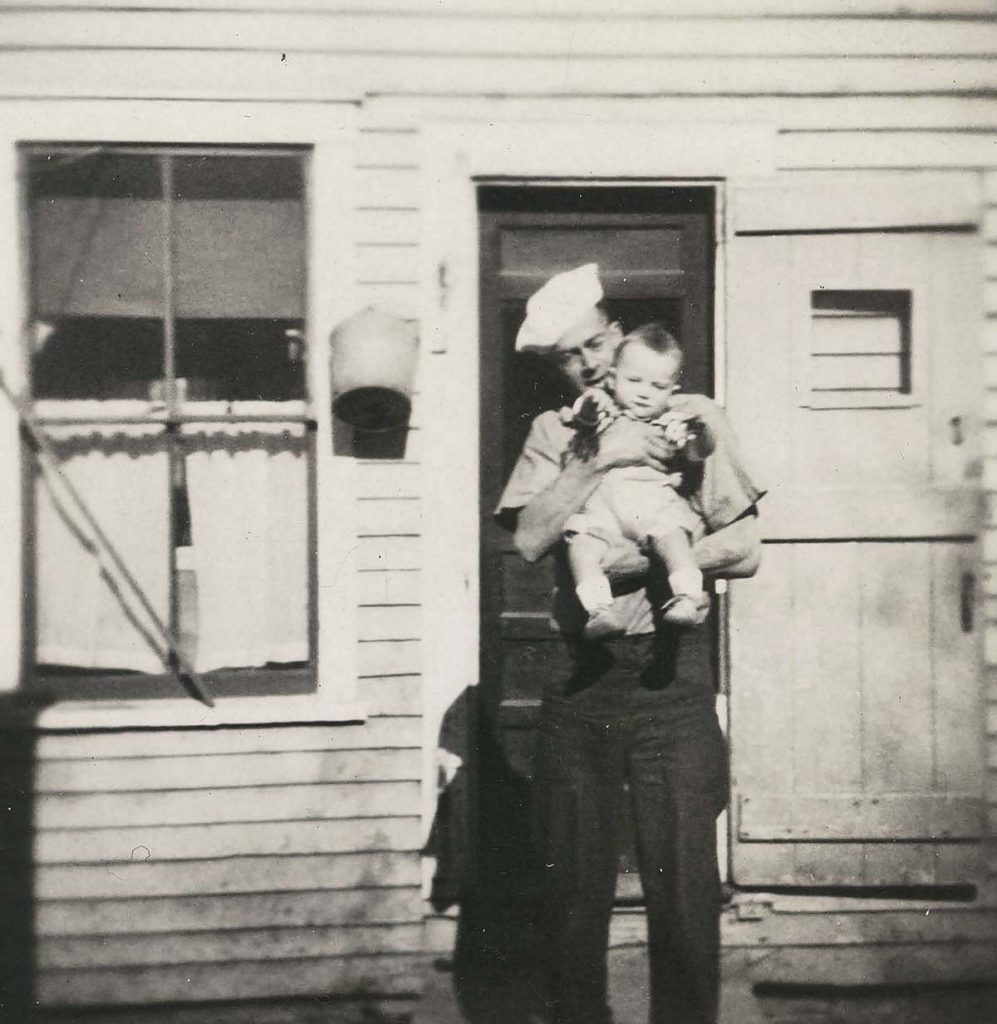