Thomas “Tommy” Orne was the third child of Maynard and Myra Orne and the second son to enlist. He was educated at the Monhegan School and for a number of years operated a trucking business on the island. He worked with his dad, Maynard, who was a carpenter, but decided he would rather work on the water. He fished with Walter Davis for a winter before enlisting in the service. Tom enlisted in the US Marine Corp in February, 1943 and served in the Anti-aircraft Artillery Group, Eighth Defense Battalion, Fifth Amphibious Corps. He was promoted from private first class to corporal by July, 1945, while located in the Pacific and was released in February, 1946.

“While he was on Okinawa, as a Marine, he discovered that Bill (his younger brother, also a Marine) was at the front and somehow Tom managed to secure permission to go and see him, which was a grand reunion for them both. Tom was a great mechanic and one of his great loves was tearing trucks apart and putting them back together. So when he came home from the service the reasonable place to look for a job was with his Uncle Alden’s garage in Rockland. That didn’t materialize so he went down to Portland over a long holiday week-end in Oct 1946 and was hired at International Harvester immediately.” Faller, Ruth Grant. THE ORNES OF MONHEGAN Add an “H” and you have Horn.

Doug and Harry Odom witnessed the marriage of Tom Orne and Virginia Richardson in December, 1946. He met Virginia on Monhegan when she came with her mother and sister to work. Tom and Virginia left the island and raised their family of four children in South Berwick, ME. Tom was the only surviving Orne veteran at the Monhegan World War II Veteran’s Day of Honor celebration on 1995. 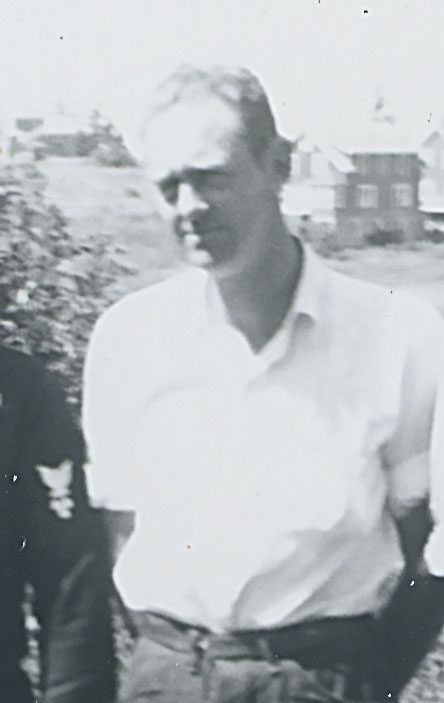 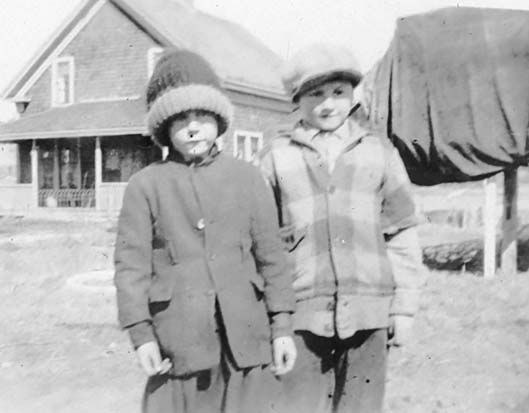 Tom and his sister Natalie Orne circa 1928 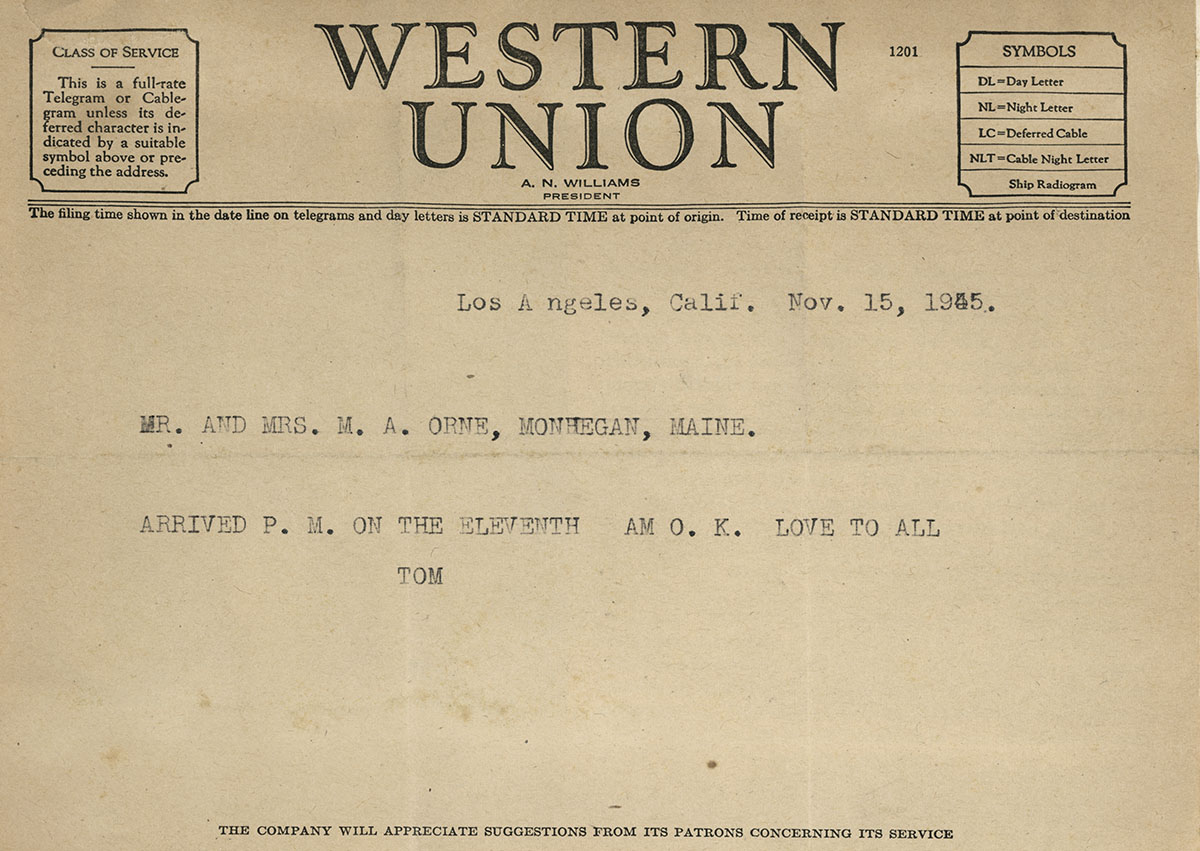 Tom sent this telegram to his parents when he
returned to the U.S. at the end of the war. 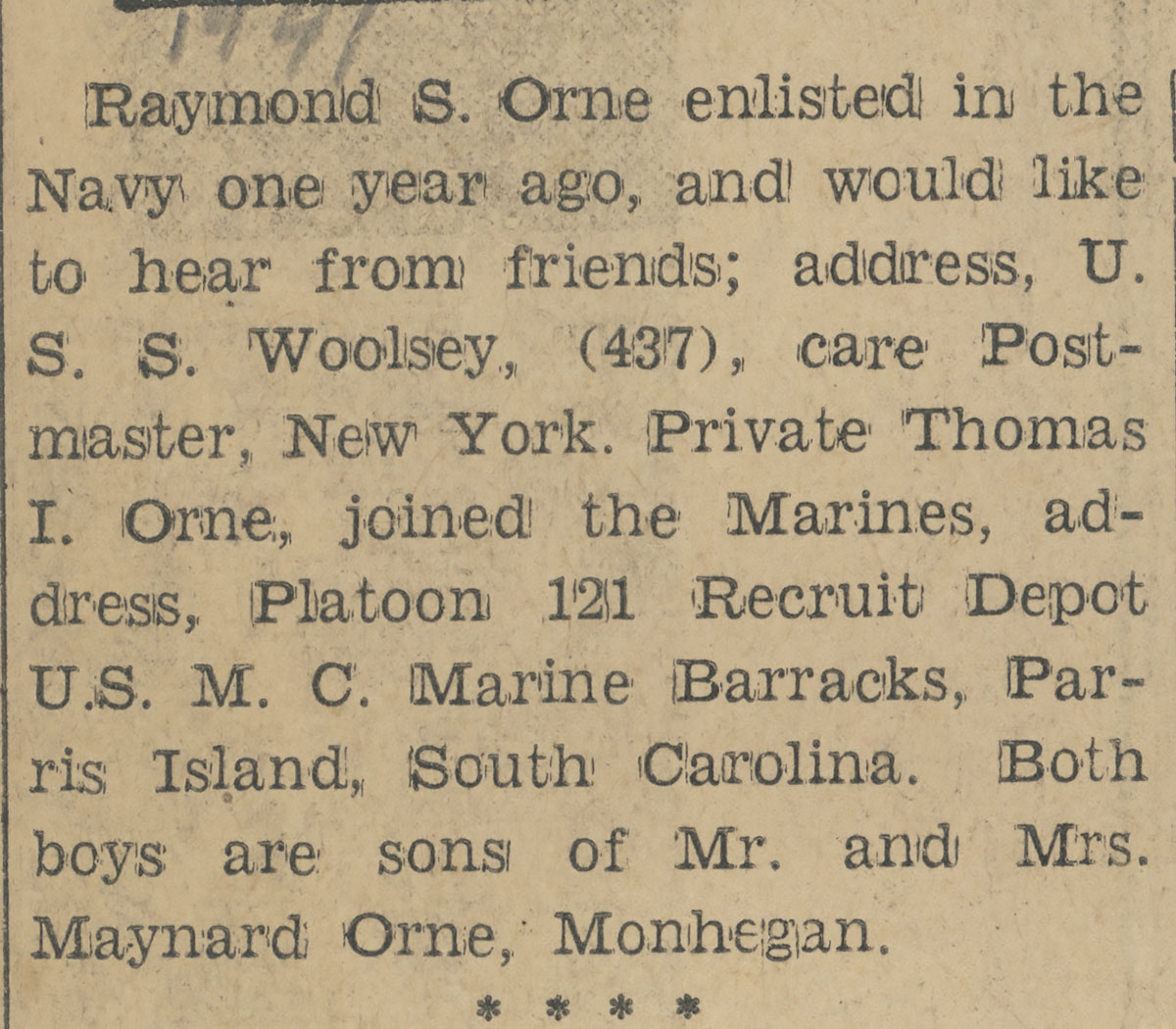