War is Over: Changes Come To Monhegan

Many of the young men returning to the island came home with brides. As these young couples settled onto the island, they purchased houses and brought new energy to the community. 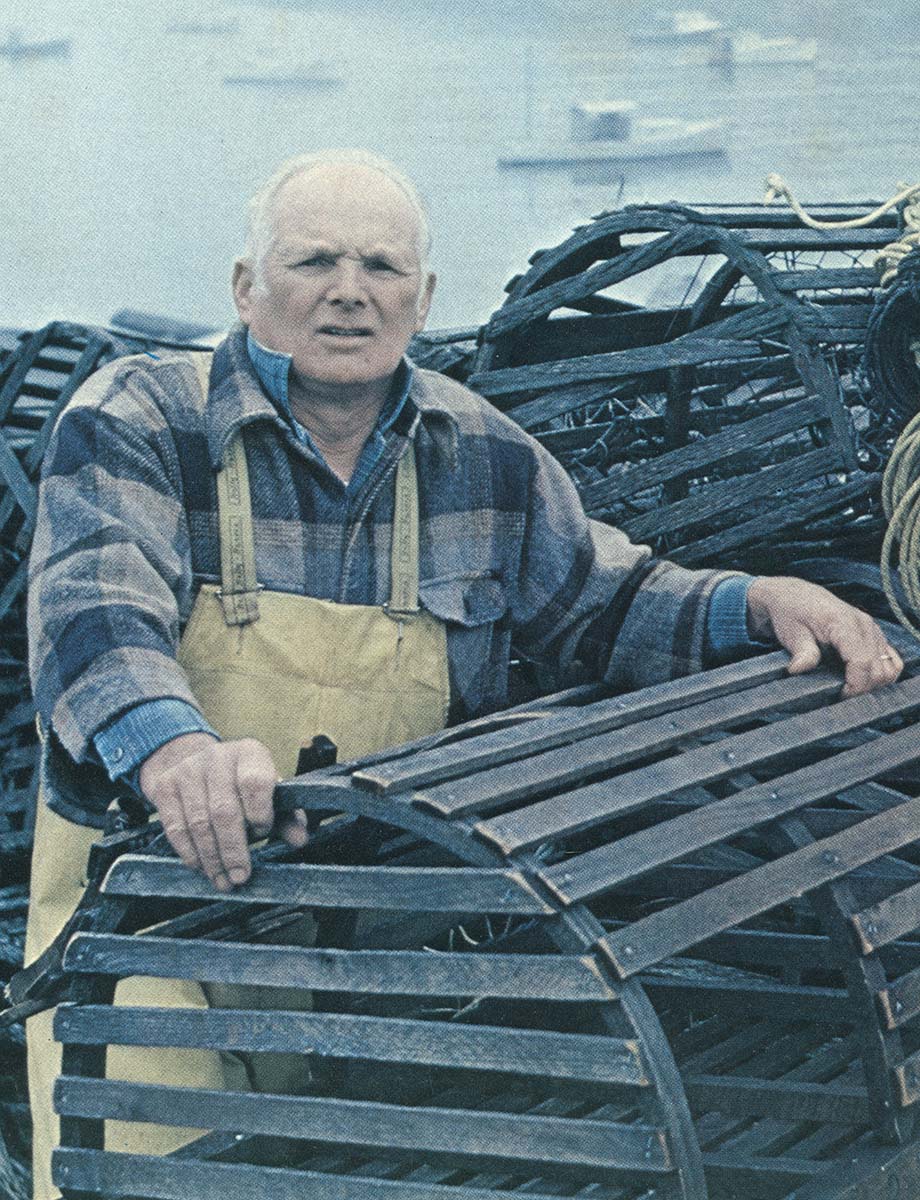 Winifred ‘Winnie’ Thomas met Vernon Burton in Camden, Maine in 1946. They married shortly after meeting and moved to Monhegan year-round. Winnie served as Monhegan’s Postmaster from 1963-1982. The Burtons enclosed the front porch of their home to house the Post Office. Vernon served as an Assessor for Monhegan Plantation, ran the water company for many years, had his own carpentry/caretaking business, and lobstered aboard his boat, f/v Winifred. When Vernon’s health declined, the couple moved to Camden, staying with and caring for Winnie’s mother. 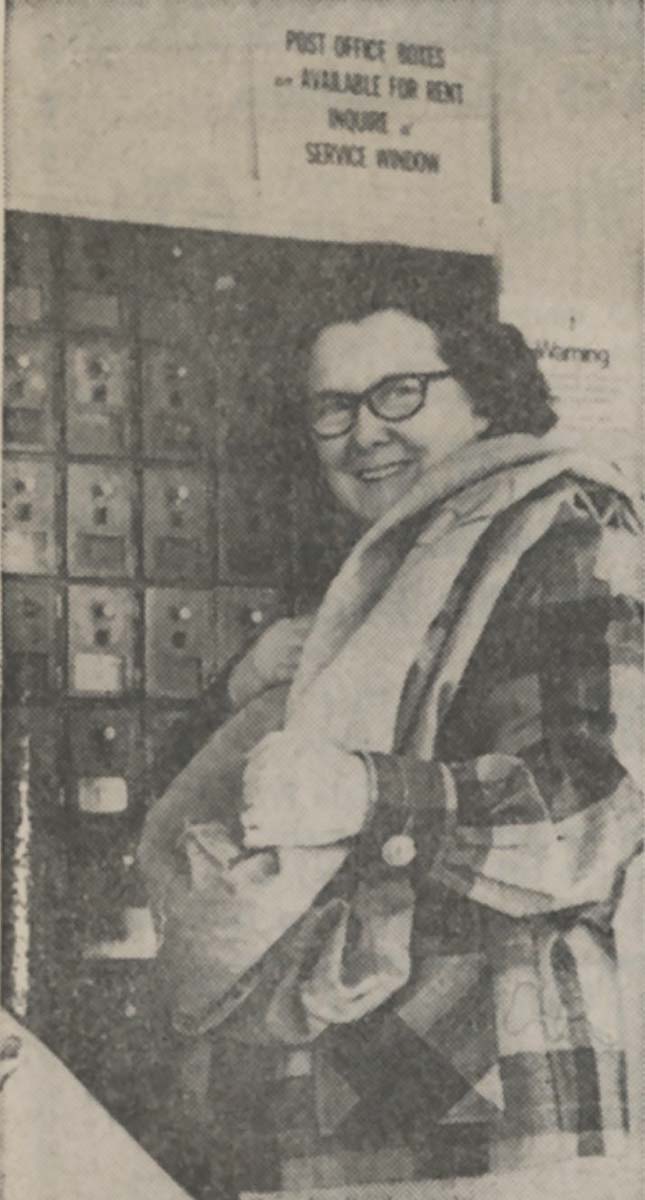 “The men were home, most of them married and starting their own families… …William and Christine Orne bought the Linnie Davis house across the meadow (Hulberg/Drexler) in 1946. Alfred and Dot Stanley became the owners of his uncle Henry’s house up on Horns Hill in 1949; Sherman and Barbara Stanley bought the old Studley house in that year, too. Vernon & Winnie were living in their Horn Homestead behind the store, which burned in November of 1963. Ruth and Dick Nunan became the owners of the Moses Starling place (V. Burton present home) and Ade & Betty Mersfelder lived up on Horns Hill (Oberman’s) where they started their first gift shop, “Rockcrest”…Dint” and Jo Day bought the Thomas Marshall house (Balano) from the Chadwicks in 1952.” Faller, Ruth Grant. New Monhegan Press, August 1994. p5. 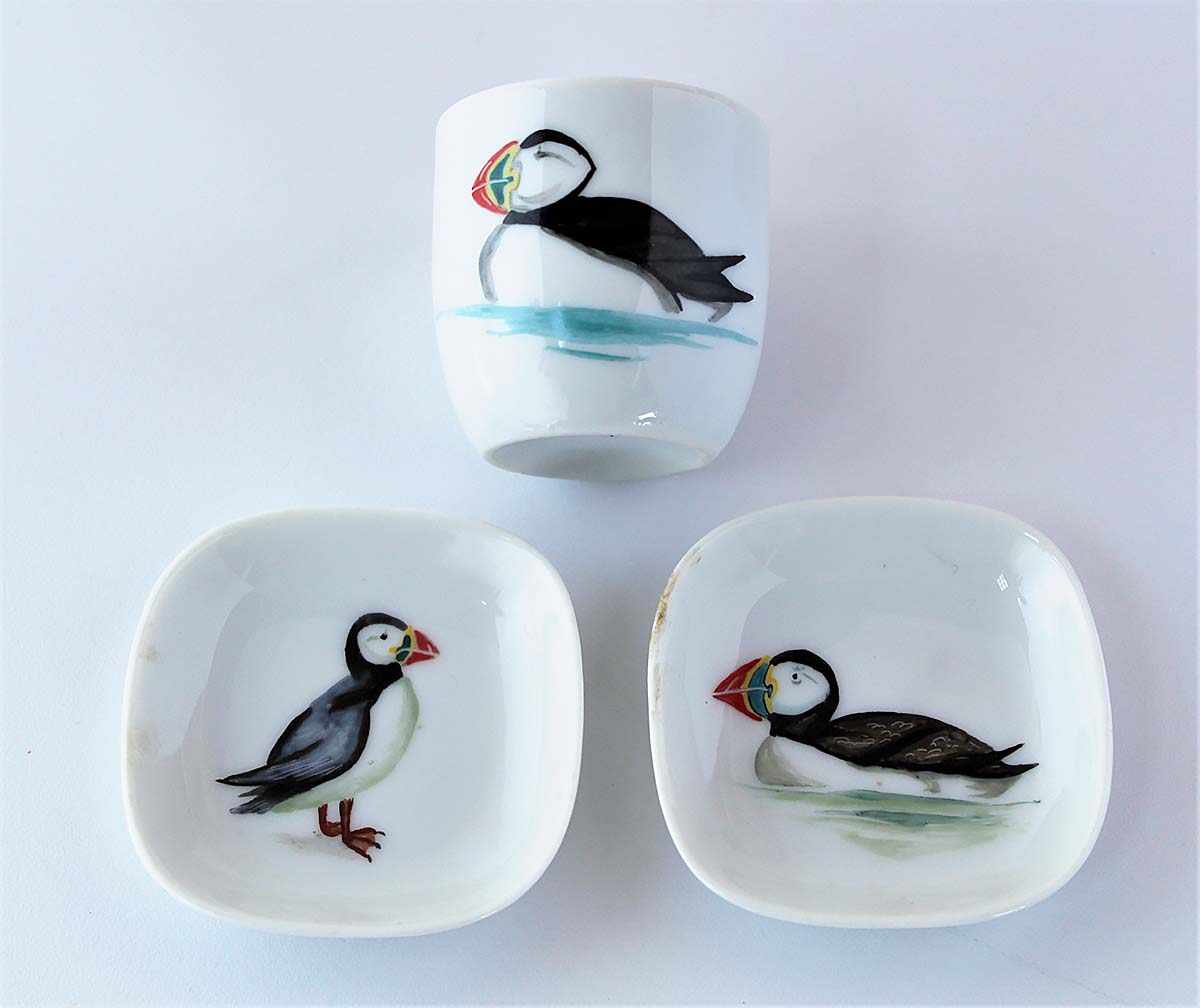 Ade Mersfelder returned to Monhegan after his release as a prisoner of war. He met Betty Shank, a young woman who worked as a waitress at the Trailing Yew. They married in 1945, raised two sons and lived year round on the island until 1966. The Mersfelder’s lived in a house on Horn Hill and opened a small shop to sell Ade’s hand-painted ceramics and wooden crafts. They moved the shop, called the Rockcrest Shop, to the main floor of the Starling fish house (Now called the Barnacle), located near the wharf. After they moved to the mainland, the Mersfelders returned summers to run the Rockcrest Shop until 1984. 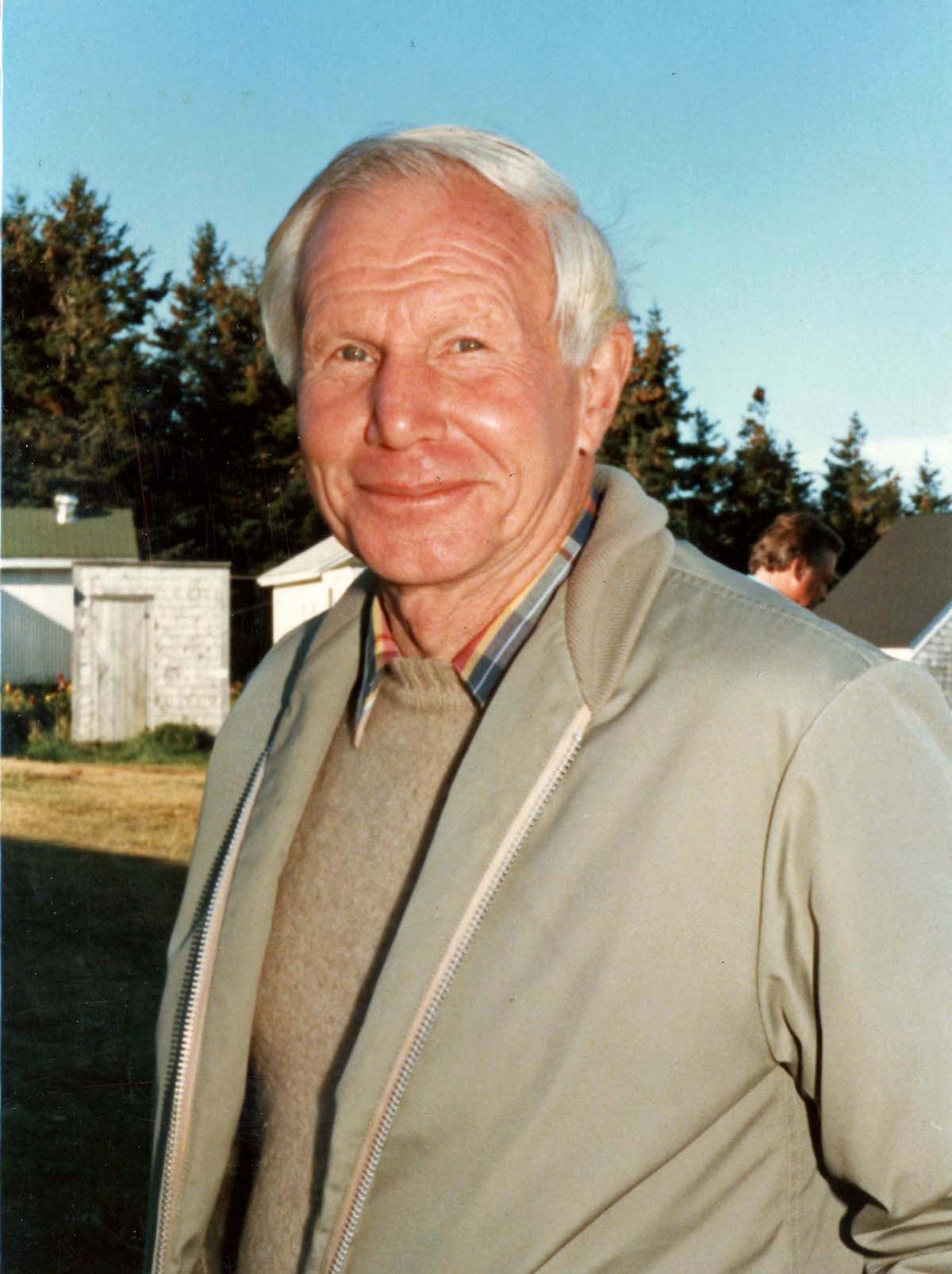 Dorothy (Dot) McDonough was born in St. John, New Brunswick, Canada in 1920. During the war, Dorothy was working at a shipyard, supporting the war effort. She was introduced to Alfred Stanley by an American Major serving in the Canadian Army. In 1946, Alfred and Dorothy married and moved to Monhegan. Alfred reportedly said, “You take care of the hill and I’ll take care of the shore.” Dorothy devoted her life to caring for Alfred, their home and a series of apricot-colored poodles the couple owned over the years. She was famous for her fluffy Bakewell biscuits and her sharp wit. Alfred lobstered for over 50 years on his boat, the Dorothy M. He was a community leader, serving for many years as Constable and Truant Officer. Dorothy and Alfred lived on the island for over 60 years before moving to the mainland. 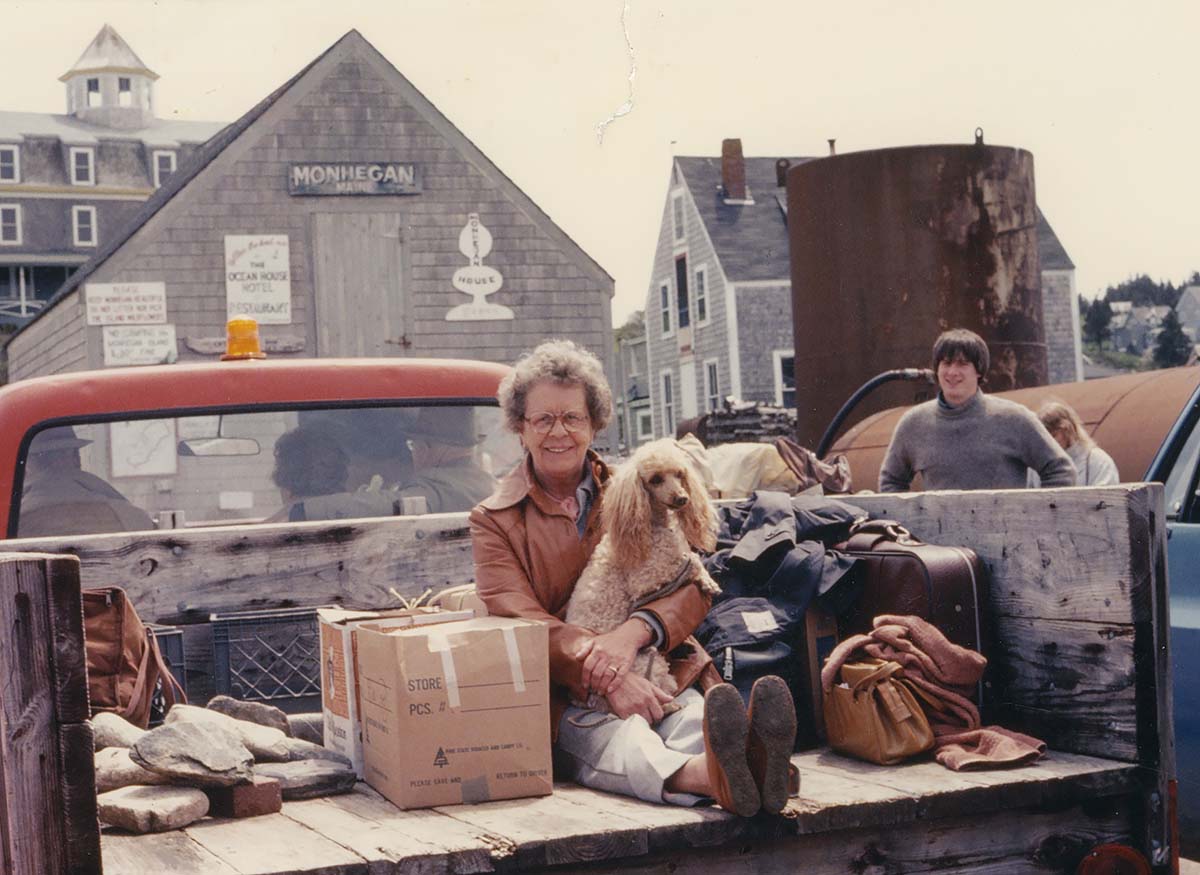 Dot and Buffy on Monhegan wharf 1983 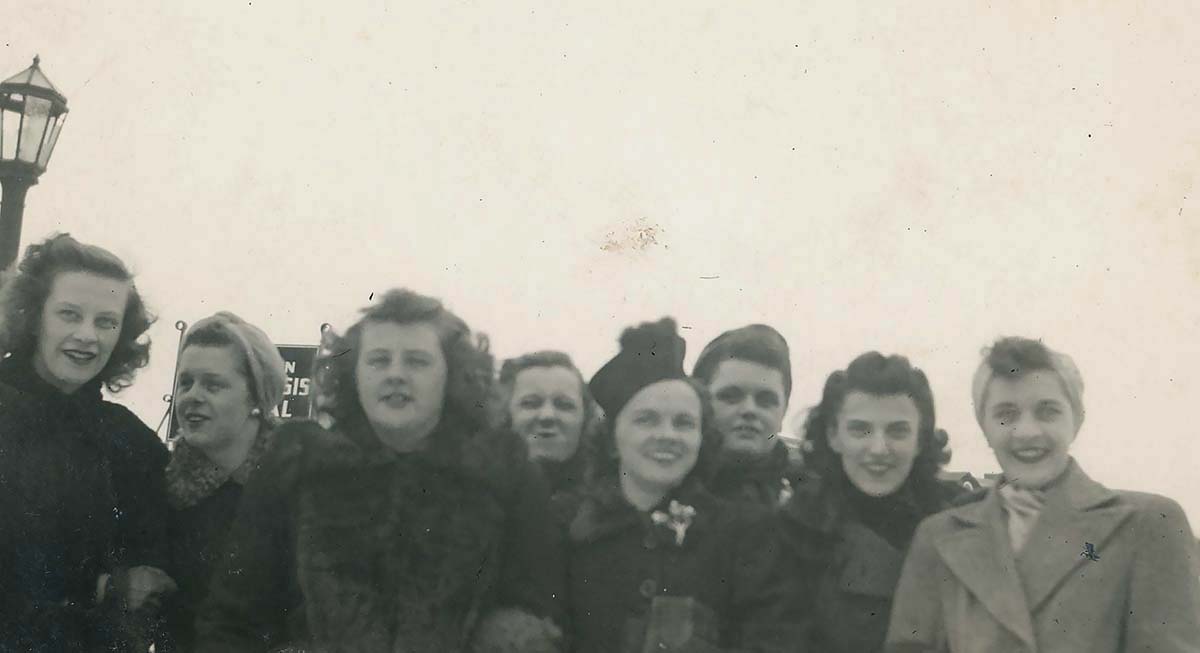 While on leave in New York, Sherm Stanley met Barbara Robinson. They married in 1946, moved to Monhegan and started their family. As a model for a New York department store, Barbara wore high heels and stylish dresses. The move to the island was a challenge for Barbara. She lived with no running water in the winter, no electricity and had to wear heavy boots and trousers when outside. She took on the challenge and taught herself to knit, sew, cook and bake. Along with raising their children, Shermie, and Caroline, Barbara was a community leader: working in the school, organizing for the church and serving as Town Clerk, Tax Collector and Treasurer. Barbara was instrumental in starting the island craft co-op, Winter Works.
Sherm became a successful fisherman, lobstering during the winter and leading fishing charters during the summer. For many years, he was an Assessor, Constable and Fire Warden. A close friend of Ted Edison, Sherm played a pivotal role in the development of the Monhegan Associates. Sherm and Barbara were one of the important couples that helped define the Monhegan post-war community. They lived on Monhegan for over 65 years, eventually moving to Florida full time shortly before Sherm died in 2019. 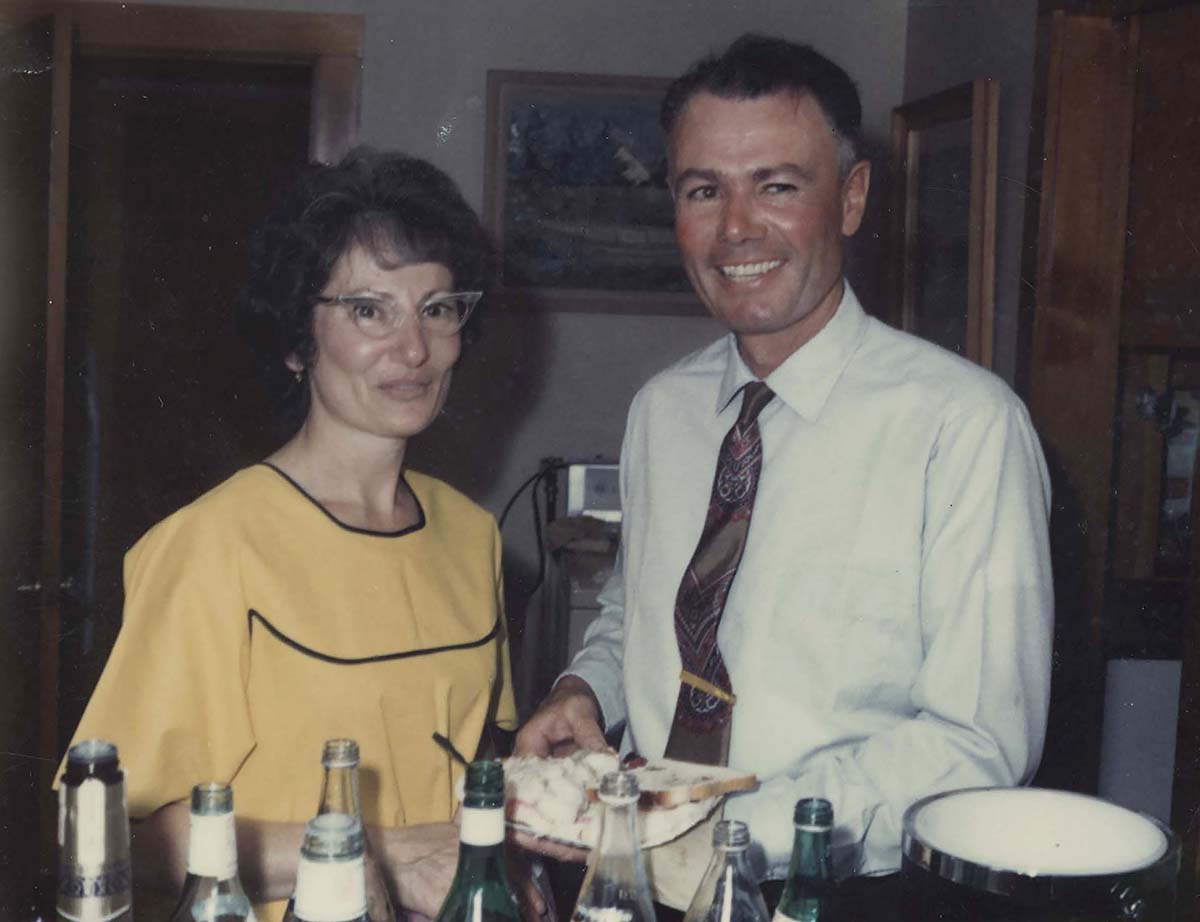 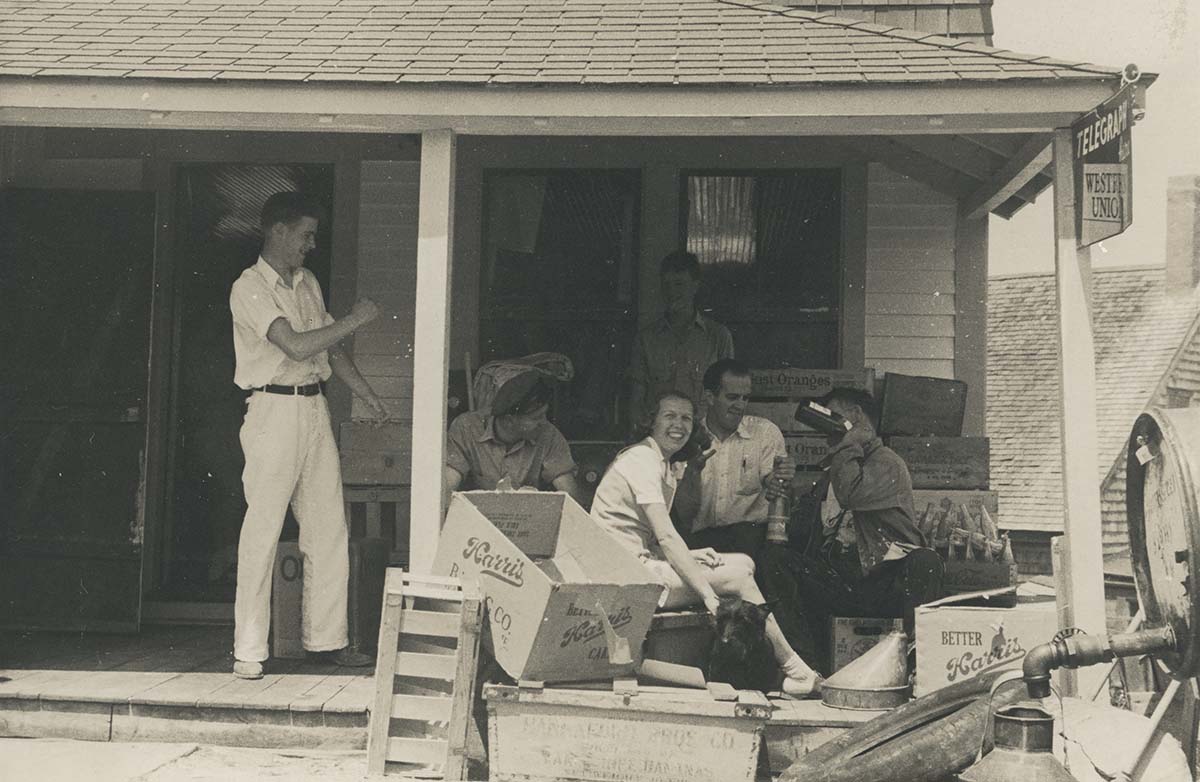 The Odom store became an important part of the social fabric of the island after Doug and Harry returned from the war.

“The front door was open from early morning until ten or so in the evening and the Store proper became a favorite gathering place both summer and winter despite the lack of a pot bellied stove. But there was a pickle barrel, a cooler with soft drinks for sipping while they munched crackers and candy and swapped stories.”
Ashley, Alta. “The Monhegan Store.” January, 1984.